You are here: Home / Reviews / Why tennis shoes on power lines? – An interesting culture indeed!
0
(0) 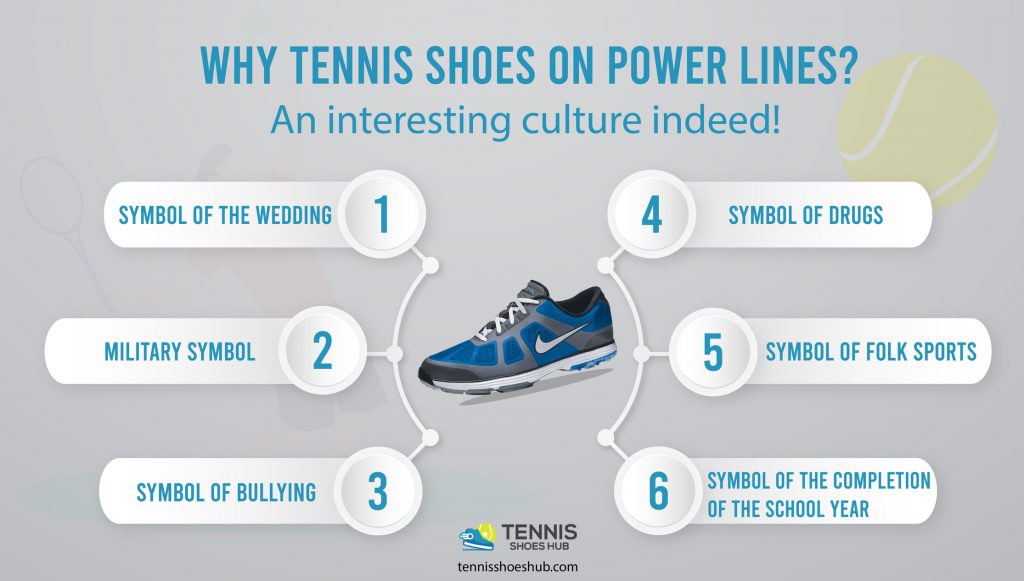 Let me tell you.
These tennis shoes are commonly thrown by the folk players as a playing practice. They throw the pair of shoes after tiding the laces together and these pairs of shoes hanged on power lines and present a funny and different theme for viewers.

This is a common practice in different areas of the world and each area has a, totally, different concept about it. The areas where these practices are common to include North America, Europe, Australia, and Latin America.

Now,
It is time to think about the concept behind these practices. You know, there are different traditions around the globe and hence, different concepts behind this funny view.

I can share with you some of the common concepts that can help you out.

Let’s go!
According to one of the theories, it is a style of bullying. This means, people stole a pair of shoes and throw them in the form of a projectile on wire lines. They know that the person to whom the pair belongs cannot regain his pair back. This is the one theory of bullying, others are given below.

One study shows that hanging shoes are the indication of the ending of the school year or the marriage, which is about to come in the next days.

Another theory says that it is a joke for drunken people when they are not in their consciousness. When they wake up, find their shoes missing.

Let’s go to the other one,
The other concept says that the hanging tennis shoes indicate the site where drugs are sold by the people or that specific site also indicates the area where gangs are found.

Now, it is said that the community of the area has removed all the hanging tennis shoes. The hanging shoes do not show a nice impression.

Come to another concept of hanging tennis shoes that is related to military training. They often beautifully color the shoes and hanging them on the wires. This is an indication of the end of military training or services.

Some study shows that the relationship of the hanging shoes with any other occasions is just a correlation; there is no truth behind this.

Now discussing the concepts in detail one by one.

Throwing the tennis shoes as a symbol of bullying

It is a common concept that the throwing of tennis shoes has been a bully. People commonly bully each other by throwing the tennis shoes on wires.

The people who belong to the specific area use this practice on different occasions. They know that the thrown pair of tennis shoes will not be back, still, they do the same for the sake of joy.

Throwing tennis shoes as a symbol of the wedding

This is a common belief that the married couple’s relationship would be strong with this practice. The tennis shoes with different colors are thrown, just before they are going to church.

They use to throw the pair of shoes before their wedding journey, as a prayer for their wishes come true, or for the successful and happy married life in the future. 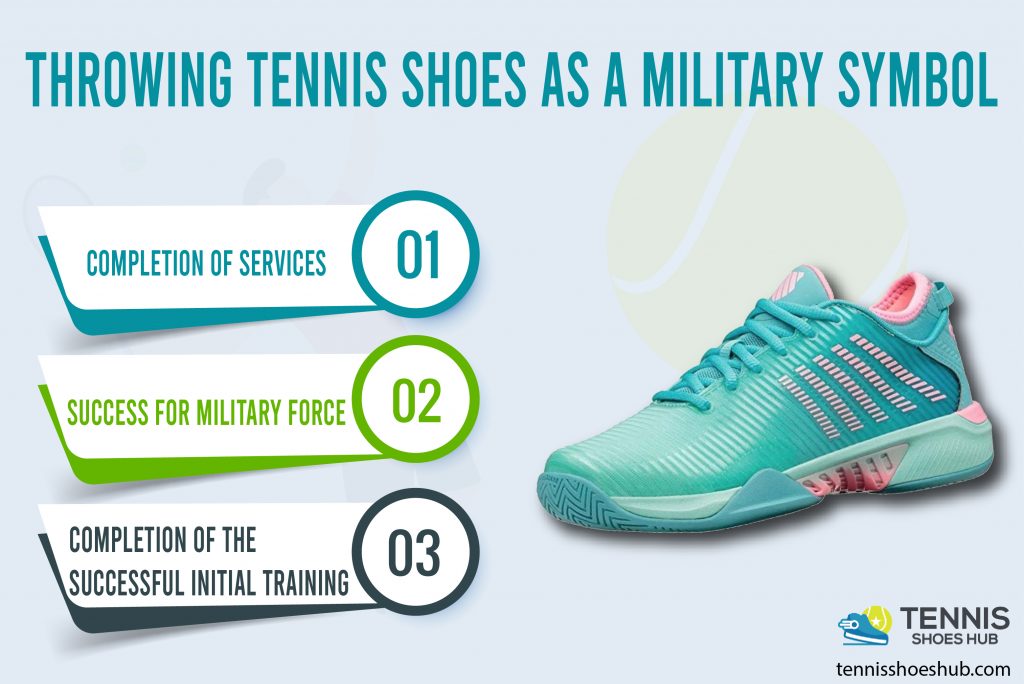 The military force uses to hang the tennis shoes on wires after the completion of the successful initial training of their soldiers.

Commonly, they hang the colored shoes as a symbol of the completion of their services. So, you can say that this is the symbol of success for military force.

The hanging shoes are a symbol of the completion of the school year, in some countries.

The schools use to hang the tennis shoes and show that they are about to successful completion of their academic year.

The shoes with different colors on the wires present a beautiful symbol in the community.

Hanging tennis shoes as a symbol of drugs

Yeah! It is the true presence of drugs in a specified area is indicated by the hanging of tennis shoes on wires. So, people can easily locate the availability of drugs by these hanging tennis shoes.

But,
It is said that when the community observed a bad impression, they removed all shoes from these areas.

This is the sign that they have banned the drug sellers and gangs. That specific notorious area for drugs was an alarming sign for their youth and upcoming generation.

Hanging tennis shoes as a symbol of folk sports

It is a common idea that tennis shoes are an indication of folk sports. The players throw the shoes on wires in the form of a projectile.

This throwing activity is part of their tradition and culture. So it acts as the main part of promoting sports activity.

In short,
This throwing activity has different meanings in different areas, according to their respective culture and tradition. So, the concept behind it depends on the area where people live in a specific culture.

Finally, I want to say that the concept of throwing tennis shoes varies from mind to mind, and culture to culture. You cannot say that one concept is right as compared to the other one. Every region and culture is different from another, so does culture and concept.

All these concepts of throwing tennis shoes on wires are right according to the concept of that specific region. Every concept is different from the other one but no one can be considered wrong.

You know,
Every nation prefers its culture and heritage. But many studies show there is no reason behind throwing tennis shoes. It is just a coincidence between these two things.

Now,
It is up to you, either you prefer the concept of hanging tennis shoes or ignore these shoes on wires. Thinking varies from person to person according to experience and exposure.

I hope you have enjoyed my post about hanging tennis shoes on the wires.

No votes so far! Be the first to rate this post.

Tennis Shoes Hub intends to provide its users with the best recommendations and top products in the market with unbiased reviews about the best tennis shoes.

tennisshoeshub.com is a participant in the Amazon Services LLC Associates Program, an affiliate advertising program designed to provide a means for sites to earn advertising fees by advertising and linking to amazon.com